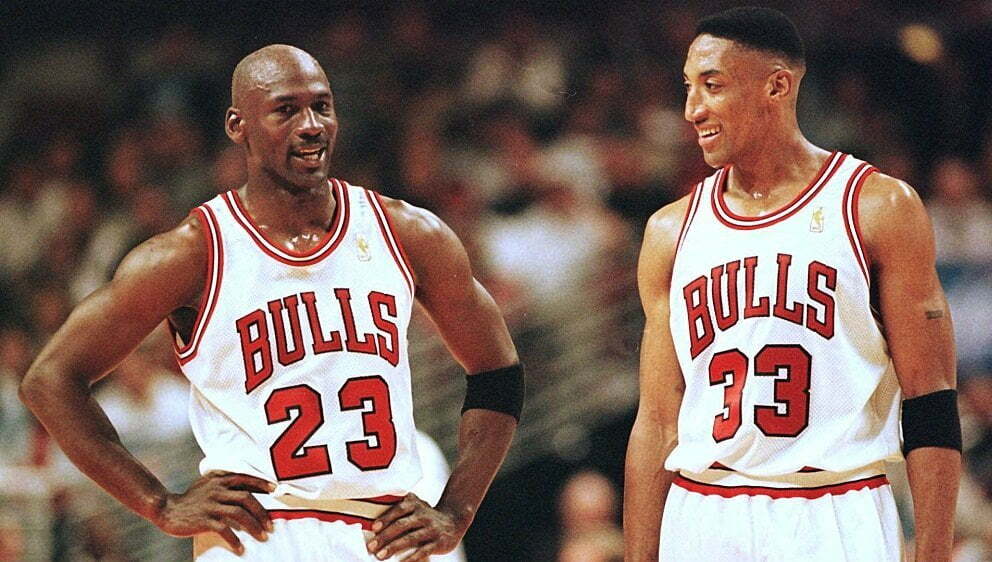 If you think back through the years, the toughest seasons, the most exciting championship games, the fights, the fouls, and the amazing teamwork, you probably have a couple of players in mind that stood out from the rest, those iconic duos that seemed to work their magic whenever they were on the court together. And there have been many iconic basketball duos throughout the years, from Michael Jordan and Scottie Pippen, to way back in the day when the Celtics relied on Kevin McHale and Larry Bird to lead their team to victory. Below, you’ll find a guide that shines a light on some of the best duos the NBA has ever seen and won’t be likely to see ever again.

Every true basketball fan will be familiar with most of the players on my list. Many of these players inspired kids and teens to learn how to jump higher, practice their shooting style, and mimic Jordan’s famous tongue-out dunk. These players each brought something special to the table, whether it was assists, dunking power, defense, or pure shooting skills. But when they teamed up with their counterpart, they made it seem as if they were almost unstoppable. Many of these duos were even undefeatable for a time, which is what made them so magnetic to watch. Many of the players also were part of some of the major events in basketball history, as part of the Dream Team that was formed for the Olympics in 1992. Others worked behind the scenes after they retired from the game, went on to be coaches, announcers, and even analysts.

Their footprint in the game was just that large that we wanted them to remain part of the league, on some level, even if we could no longer watch them move on the court. And they’re a big part of what makes the NBA what it is today, why fans have never stopped watching, especially those who have witnessed the magic of these famous duos on the court. These are the same fans that sit back waiting and hoping for some of that magic to be recreated with the next big player that enters the NBA, or the next perfect pairing. I hope you enjoy this walk through memory lane, through the years of the NBA when teamwork and skill were beginning to come together and turn the NBA into one of the biggest and well-known sports leagues in the world.

Back in the day, the Chicago Bulls were unstoppable. Sure, they had players like Dennis Rodman and BJ Armstrong that were both integral parts of the team, but no lights shone brighter than when Michael Jordan and Scottie Pippen walked on that court. While the attention was usually focused mainly on Jordan, Pippen was considered one of the greatest multi-dimensional forces in the 1990s. He and Jordan led their team to a total of three titles during their era and their skills and their amazing ability to play together so smoothly is still talked about to this day.

Where would the Celtics have been without Bill Russell and Bob Cousy in the late 50s and early 60s? Together, these players earned title after title. Cousy had an uncanny ability to handle the ball and ended up being the perfect complement to Russell’s playing style and skills. Together, they won a total of six NBA championships. Together, these two were unstoppable with their defense, offense, rebounds, dribbling skills, passes, and shot-blocking.

When you saw Magic Johnson on the court moving with Kareem Abdul Jabbar, you automatically not only knew they were going to crush the other team, you knew it was going to be an exciting game to watch, one that kept you locked in your seat from start to finish. Magic and Kareem were unstoppable in the 80s and their games, teamwork, and playing strategies are often used as examples to this day, in any locker room.

When James left Cleveland he teamed up with Dwyane Wade in the hopes of finally grabbing a championship. James and Wade worked together beautifully and began to build their championship franchise with the Heat. Wade and James reached the NBA finals each of their four seasons together and managed to snag two championships in 2012-13

The Celtics were the IT team in the 1980s. Kevin McHale and Larry Bird took their team to the finals for a total of five times. During this time, there was a major rivalry between the Lakers and the Celtics as this duo went head to head with Magic Johnson and Kareem Abdul Jabbar. As you can imagine, a game with these two teams was magnetic to watch, as you constantly tried to figure out who to root for or call who was going to win. Duos like McHale and Bird made up what we now consider the golden age of basketball and you won’t easily find players that can really elevate each other the way these two did.

While it’s no secret these two were not very close off the court, on the court, they were a powerhouse. These two played on the Lakers together from 96-04, dominating other teams and earning back to back to back titles between 2000 and 2002. Unfortunately, Shaq became tired of Bryant always standing in the spotlight and went on to pursue a career with the Heat in 2004.

If you’re a pistons fan, then you’re more than familiar with this duo. These two helped their team make it to three NBA finals between 88 and 90, winning the championship the second and third time. There were many players on the Pistons during that time that did their part to help their team win, but Dumars and Thomas were the players who called the shots. Thomas was a natural leader on the court, while Dumars was a top defender and world-class shooter. Both eventually earned MVP nods for the NBA finals.

If you’re a Golden State Warriors fan, then you already know how this duo has transformed the Warriors and made them what they are today. Steph Curry is considered one of the best shooters in the game and when Durant teamed up with Curry, they made the Warriors unstoppable. Unfortunately, Durant chose not to re-sign with the organization once he became injured in 2019, and decided to move on because he claimed he never felt like a real part of the team.

David Robinson was a force to be reckoned with in the 1990s. He became known as the Admiral and guided his team to the playoffs each year. However, it was only once the San Antonio Spurs added Tim Duncan to their lineup that the team really took the NBA by storm. Just like Robinson in the past, Duncan was named rookie of the year and together, they lead their team to their first ever title in 1999, with another title in 2003.

On the NBA’s all-time scoring list, Karl Malone ranks second, after Kareem Abdul Jabbar. Mailman Malone owes many of his shots to his longtime teammate and friend, John Stockton, who was an unstoppable assist machine during their time together on the court. In fact, the Jazz only made it to the NBA finals two times, and this was during the Malone and Stockton years. Unfortunately, on both occasions, they lost to the unstoppable Chicago Bulls.

Jerry West and Wilt Chamberlain are both NBA hall of famers and they did well for themselves in the NBA in general, before they teamed up on the Lakers. Once Chamberlain and West were on the same team, it was pretty clear that there was no stopping them. Because of the heavy competition in Boston at the time, it took a while, but eventually, this duo would lead their team to glory, winning the 1972 NBA championship.

When Malone joined the Sixers that was led by Dr. J, way back in the 1980s, fans quickly found that this duo was a match that was made in heaven. They went on to win a total of sixty-five games together and basically swept the Lakers to the finals. While they didn’t win any more titles during the last three years they played together, they remained fascinating and exciting to watch.

During their time together in the NBA, Shawn Kemp and Gary Payton made quite a big impact on the game of basketball in general. Before they became the Oklahoma City Thunder, the team was the Seattle Supersonics. During the 1990s, these two showed us some amazing chemistry on the court. While they never earned a title, many Supersonic fans can still recall the huge impact they had on the league.

The Celtics are a team that holds the record for the most NBA titles. With players such as Russell in the 1960s, they needed a couple of players that could keep their team winning game after game in the 1970s and those players were John Havlicek and Dave Cowens. These players helped to contribute their part to the Celtic legacy, adding a couple of titles during their time on the team. Fortunately, Larry Bird came in during the 1980s to keep the Celtic’s reputation as one of the best teams in the NBA alive and well.

During the 1990s, there was no shortage of exceptional duos. The team up of Clyde Drexler and Hakeem Olajuwon was another one of those pairings that many fans have not been able to forget. These two made the Rockets a force to be reckoned with and even won a couple of titles. Both players still remain a major influence on the future of the league.

The end of Paul Arizin’s career somewhat overlapped the beginning of Chamberlain’s however, in their short amount of time together, they were amazing to behold. Combined, these two players made up seventy points per game, which is pretty impressive. Wilt happened to score fifty of those points. Their chemistry on the court was unmistakable, which is why so many fans can easily recall their short-lived time together on the court.

This list of the iconic basketball duos throughout the years is by no means complete, there are just simply too many players to list and in some cases, the players that are considered iconic duos can be subjective, based on a fan’s favorite team or player. I’ve included many of the players that have become part of NBA legend, as far as points, championship wins, rebounds, playing style, and general skill goes. Many of these players playing styles are still mimicked and admired today. You may see Lebron’s shooting skills and think of Chamberlain, or Curry’s playing style and how he dominates the opposing team and think of Kobe. The players on this list remain very inspiring to those currently in the NBA and those players who aspire to make the cut and lead their future team to glory.