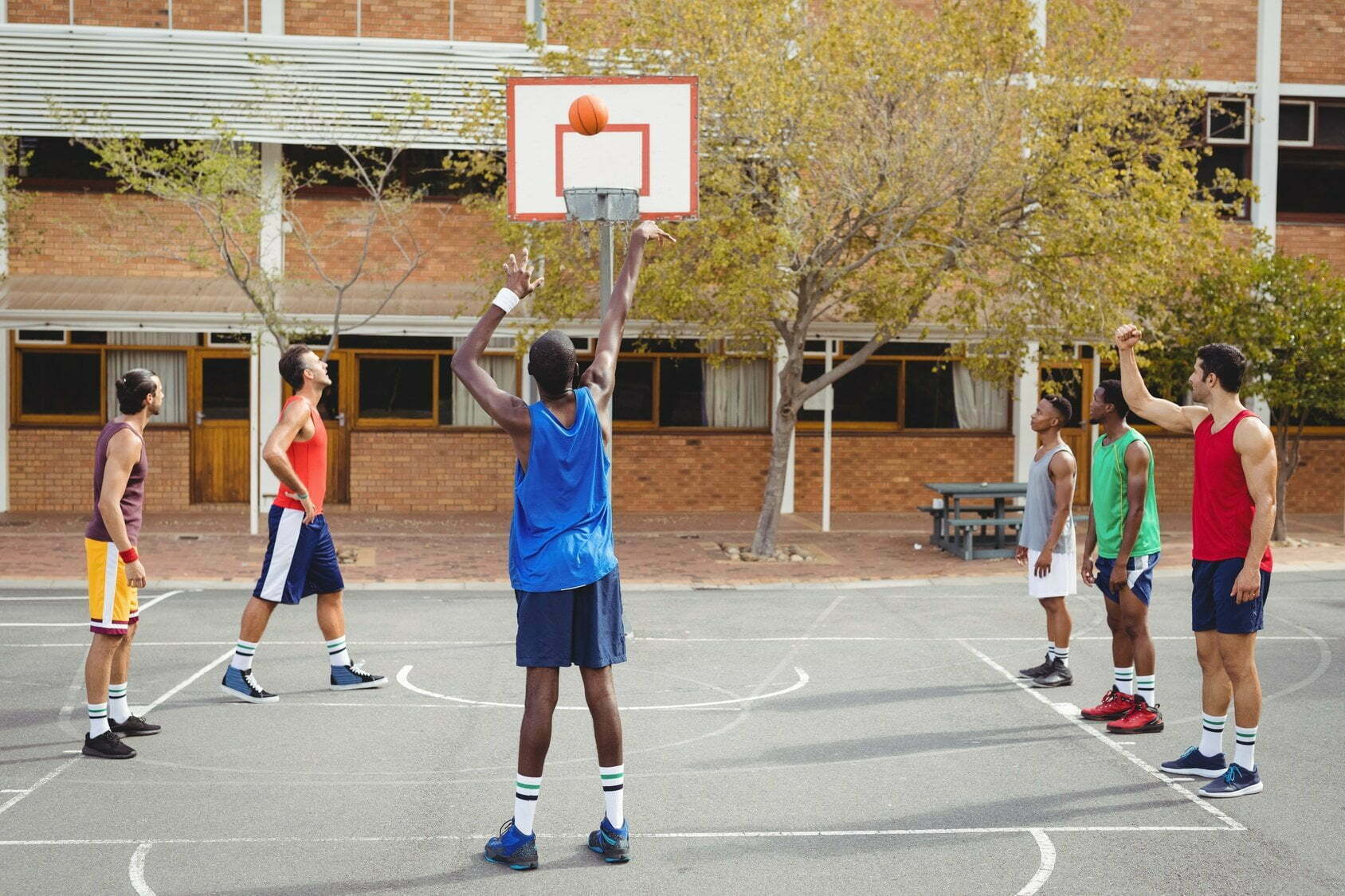 The players not giving 100% and being bored at training are the two worst fears of every coach. When you are not part of a team and train by yourself, diversifying your routines is key to staying motivated and keep progressing. This is why I decided to share some of the best basketball shooting drills with you. Those can be used anywhere you train with your friends and/or teammates and are great for both kids and adults. Moreover, nothing beats a shooting drill when it comes to the fun factor involved in training. In other words – constantly doing new drills will make you progress and keep things interesting throughout the process.

Some of the best basketball shooting drills are:

All those drills are super fun and very competitive. This allows for players not only to drill their throws more and from all sorts of positions but to do it in a competitive and energetic environment which is very similar to the one during a real basketball game.

Before I get into the actual drills I want to emphasize on basketball shooting itself. When concentrating on shooting you shouldn’t start with drills immediately but learn the fundamentals first. That way, you will ensure that by the time you get to actual shooting, your throws will be good enough and all you will have to make more precise is your aim and your technique. From then onward, everything is repetition and consistency.

Now, let’s get started with the shooting drills I have prepared for you…

All right, this is my all-time favorite drill and is the most dynamic. Drills like this one and the rest I will describe are best done with coaches, team members, or even friends. It is hard to drill alone as usually drills consist of competing against another person or having the ball passed at you by someone.

The team is split in half, and position themselves in two lines at both sides of the basket. The player at the front shoots and if he scores he has to do the following:

At that point, if he scores he gets a cone and brings it back to the team. If the player misses he gets back in line with his team. The team that collects the most (or all) cones at the end of the timed game wins.

If a player misses his first shot he simply gets the ball, passes it on and goes at the back of the line. Speed is important here and the fact that the other team might beat you puts a little pressure on you, making the shooting feel closer to what you will feel during a real competition.

This is an even more exhausting drill than the first one and is designed exactly for that. There are a lot of players that slow down as the game progresses due to their energy levels. This drill will teach them to feel comfortable when slightly (or really) tired and will make them far sharper when they are fresh.

The game is started when three teams (of up to any number of people) are placed on the base line next to each other. On signal, the first player starts running with the ball to the opposite basketball hoop. There, the player shoots either a three-pointer or any other pre-agreed shot. The player then rebounds its own shot and runs back to the other basket where he shoots again, ultimately catching the ball and passing it to the next team member.

There are a lot of rules that can be changed here. For example, players can agree that they must bounce the ball while running or simply hold it. The shooting position at each basket needs to be determined before the start of the game, too.

The game ends either when all members of each group have had their turn or whenever a team reaches a certain score. I really like when we initially set a score of 20, for example, and everybody tries to reach it as fast as they can.

Note: while one of the group’s players is running the others must not cross the base line.

Give And Go Shooting 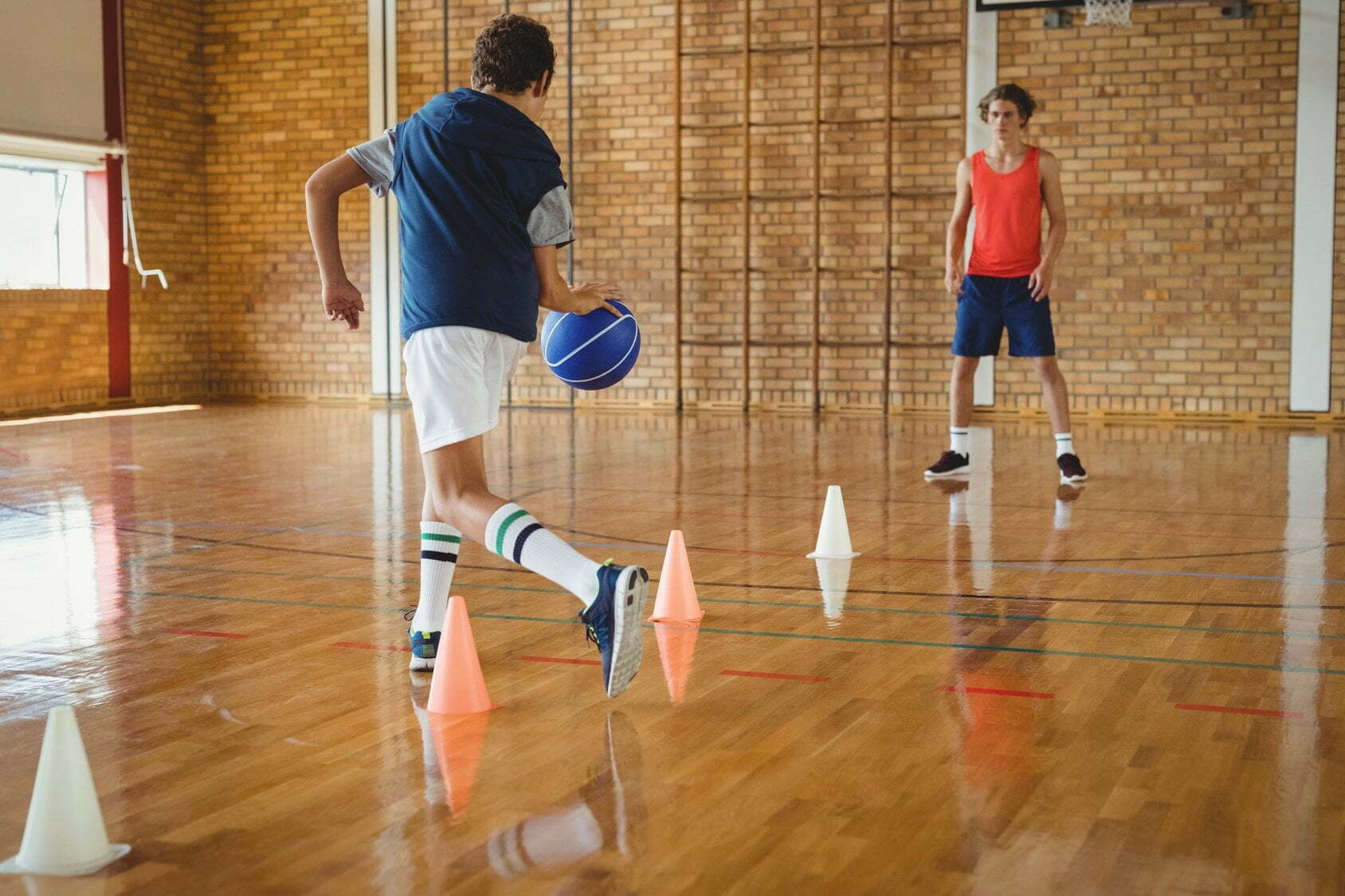 This one is a little bit harder to turn competitive but nothing is impossible.

The team is split in half again with two coaches on each side. Everyone gets a ball and gets in line. Both lines of players are at both sides of the three point line and there are a number of cones in front of them. The first player has to weave the cones, dribble to the coach and pass him the ball.

The coach positioning can be as they wish. The coach gives back the ball then the player attacks and shoots from different positions. Then he takes the ball and dribbles to the back of the opposite line of players.

It can be turned in a game when the winner is the player who scores from all pre-agreed positions.

You can practice this method with the coach being a wall in front of you. Pass the ball to the wall and get it back then do different follow-up attacks on the rim.

This is one of the best drills for young or new players that are still learning and perfecting their throwing. It is fairly simple and requires minimum two people. You can actually do this with a wall, but you won’t really get the same feeling out of the drill.

This drill is done by making players face each other standing at about 10 feet apart. Each of the players shoots the ball while the other catches and then shoots on his own. This is repeated until the coach says otherwise. That is a great way for the coach to observe as many players at once as possible and correct potential mistakes in their shooting techniques.

Check out Vert Shock to learn more about one of the best jumping programs out there.

The 30 And 1 Shooting Drill

This is another personal favorite of mine as it is very competitive and fun. Players must split into two teams.

You should choose three spots to shoot from before the game starts. Those three spots should be near the basket (especially if there are younger players). The fourth spot should be as far away possible while still keeping it real.

Each team has to score 10 times from each of the three spots and then score once from the far away spot. Players shoot, rebound and pass the ball to the next player no matter if they score or not.

The final shot just needs to happen once for the team to win which gives teams an extra opportunity to catch up if they have fallen behind on the other positions. It is very fun since sometimes this final shot is almost impossible, especially if you’ve chosen a far enough spot.

The first team to get 31 points wins and then you can swap the positions of the teams of mix the people for a more equal second game.

Want to learn how to referee a basketball game for your friends? Click here to check out my dedicated article on the topic.

How Do You Do Layups?

Layups can be done with either one of two feet. You start by running towards the basket and once you are near it, jump with either your leading leg or both at the same time going towards the basket. The most common combination is jumping with the left foot so that you can shoot or put the ball in with your right hand, since most players are right-handed. Still, you will get the most air time and distance when you jump with one foot so try doing it until you use one of your feet only.

Speaking of layups, you might want to check out the next frequently asked question and its answer:

What Is The Most Missed Shot In Basketball?

That is the layup we just talked about. It isn’t the most missed because its hard to do but simply because it is the shot players use most often and therefore there are a lot of misses when it comes to it. Other shots, like three pointers get missed proportionally more but happen on a way smaller scale and therefore the numbers are far less.

By that logic, players who take the most shots will most likely have the most misses as well. That brings me to the next question I get the most…

Who Has The Most Missed Shots Of All Time?

The player which has the most missed shots is Kobe Bryant (at least in the NBA). His record is in the thousands and passed 13,000 before his retirement from the sport.

How Can I Improve My Shooting In Basketball?

I already answered that in a couple of occasions but it is great to repeat it as repetition is actually the answer. Be consistent and keep drilling until you perfect your craft. This is valid for anything you do in life, but even more so for sports like basketball where muscle memory plays such a huge role.

Knowing which are the best basketball shooting drills and learning how and when to implement them in your regular training is the key to diversifying your basketball routine and most importantly – having fun with your teammates and friends. In most of the routines, I listed there is an opportunity for a coach to supervise the situation and tell you where and what to change in your game.