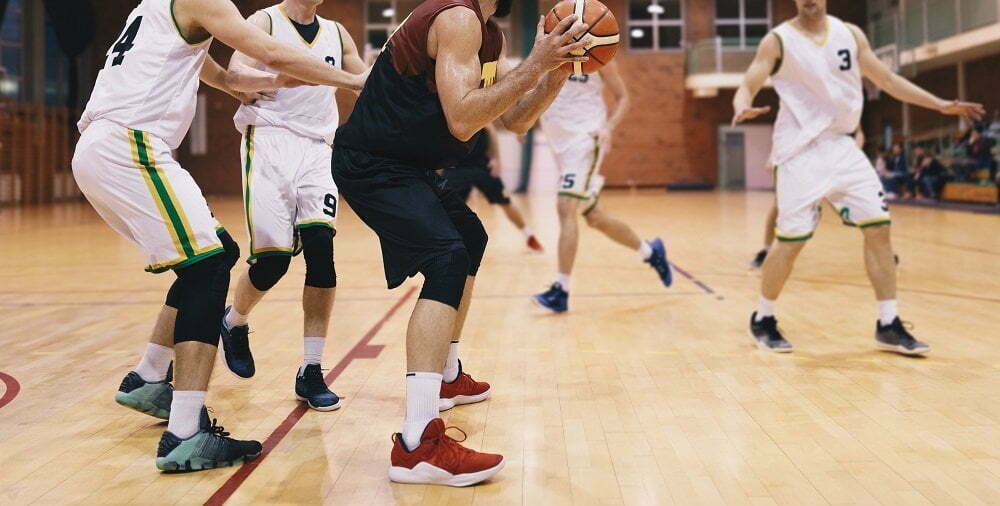 Learning basketball passing fundamentals is the essence of outstanding teamwork. As a fan, it’s fascinating to watch a perfectly delivered pass for every easy dunk or layup. Turnovers and poor passing will kill a team’s offense faster than anything. A bad pass can often result in no shot taken and a turnover. It’s also an opportunity lost to score. A player must become a better passer and a coach must continue to find ways to teach their players how to become better.

When you have a couple of players facing each other and practicing how to master basketball bounce passes or chest passes, passing may seem easy. but once a defender is placed on each of them, then passing becomes very difficult. Once you get past the early formative stages when it comes to player development, basketball passing drills are needed in order to simulate game situations. Using the best basketball return system can help with shot consistency, player development, and a more efficient practice. Special attention must be placed on passing and teamwork in order to get a team in sync on the court.

During passing drills, players will catch and pass the ball on the move which makes them better than stationary drills.

The Art of Passing

An excellent pass is one that’s caught by a receiver. Two parts are involved for a successful pass, which involves receiving the pass and making the pass. The person that’s receiving the pass should have relaxed hands and catch the ball using both hands. In most cases, the receiver should be moving toward the pass in order to meet it.

A receiver should never be stationary, instead, they must learn to get open by using back cuts and V cuts, then steal from the defender. Basically, the receiver must always know where the ball is.

When receiving and passing use both hands. The three basic passes involve the overhead, bounce, and chest passes. You should also consider the baseball and behind the back pass. With all three of the basic passes, the technique is the same. For any pass you’ll step toward a receiver, extending your arms towards them with your thumbs down with your palms up. The pass should be delivered accurately and where the receiver wants it.

Thinking On Your Feet 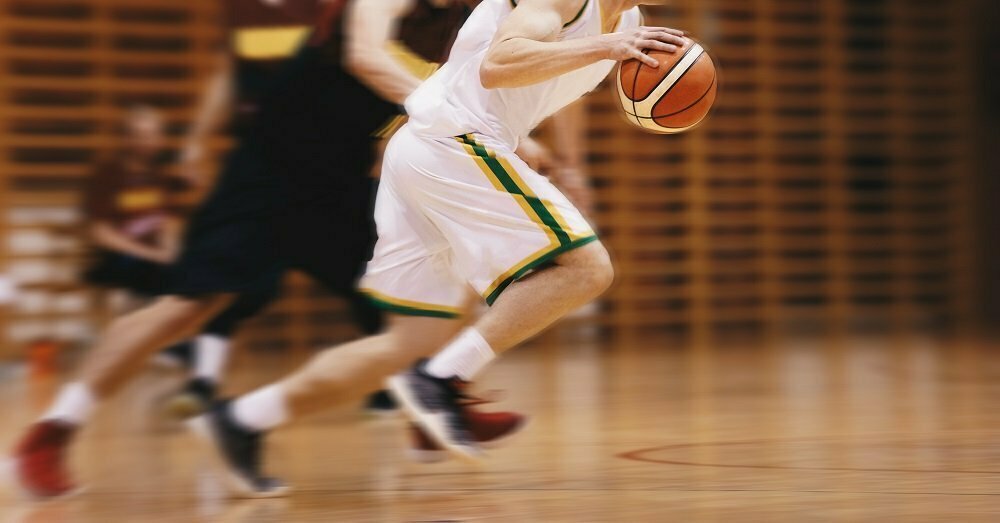 Making the right decisions with the ball is a big part of passing. When you make a simple pass, the easiest one will get the job done. Don’t show off and make a crazy behind-the-back pass for attention. Especially when a simple bounce or chest pass will do the job.

There will be times when a behind the back pass executed correctly will be the right move, however, you shouldn’t pass into the defense if a receiver is surrounded by defenders. While this sounds obvious, this is a common mistake many beginners make. Always pass away from the defense.

Never pass into a situation in which the receiver is in a bad position to receive the ball. As an example, never pass the ball when the receiver has their back turned away from the hoop and there are defenders coming up on the blindside.

If a passer is any good then they’ll know how to take advantage of an open the passing lane is and how to fake out the opponent, then they’ll pass the ball in the opposite direction. The shot fake and the pass fake are two of the most important and under-taught fundamentals of passing.

Faking Out Your Opponent

Mastering a fake pass will be a powerful skill to have on the court.  Just looking in the opposite direction, as you pass or making a ball fake can often open the desired passing lane. Avoid looking directly at your receiver when you’re passing.

Know where your teammates are at all times, keep your eyes forward, and use your peripheral vision. A fake pass can be executed when a player is dribbling with their head down, then they make a quick pass at the end of the dribble to a defender who slips into the passing lane.

A skilled passer knows how to deliver the ball that’s the right angle and velocity to make it easier for the receiver to catch. If the pass is too hard, even if it’s in the perfect location, it can be uncatchable by the receiver, costing you the ball. If you pass the ball too easy and soft then the defense will be able to intercept it.

Both a receiver and passer must learn how to read the defense. Players must learn how to dish and drive where they’re making a penetrating dribble move, at the last second. Once they’ve drawn the defense in, they can either kick it out to the corner or wing, or for a 3-pointer, or they can make a bounce pass to a post player.

When you make a pass, it must be done in a totally controlled manner, just like with shooting. You need to have both feet on the floor and be well-balanced. When you’re dribbling down the court on a fast break, you must use standard control and keep your eyes forward, in order to deliver a pass to a teammate that’s open at the correct moment.

With the fastbreak, you’ll notice a common passing error that’s made from time to time. If a player is going to be dribbling the ball up the court, making the final pass on the break, then they’ll bring the ball back on the hip at the end of a triple in order to get more velocity on the pass

A defender that’s hustling can come up from behind, taking the ball from the pastor. This will usually cause the ball to go out of bounds, and the pastor has lost a chance to score a Leo. When a player is making this passing with keep the fall in front of them.

When you pass, try to avoid getting into the habit of jumping. When a player jumps when they pass, they’ll have no option other than to pass. Should the defense be close by in the passing lane while the player is airborne, that airborne player’s in trouble.

The chest pass isn’t really good for perimeter passing, despite what many players are taught. In order to make a chest pass, a player needs a passing lane that’s clear, directly in front of them. If the defender is directly in front of them, the pass that comes from their chest area can easily be deflected. In this situation, you’ll want to either use a two-handed overhead pass or a lateral pass.

When a player makes a lateral pass, they’ll fake opposite, crossing their opposite foot in front of them. The pass is delivered with some zip on it so it’s not easily intercepted.

As an example, if a player wants to pass the ball to the right, they’ll make a fake to the left, then cross their left foot over in front of them as they pivot on their right foot and make the pass to the right. Similar to a chest pass, with the exception that the pass isn’t released from the center of the chest, but more from the side.

This pass is often used to move the ball quickly around the perimeter. The player’s target is 13 inches above their head or a little higher than the chest. When making this pass, a player should not bring the ball back behind their head. Instead they must keep it straight up and over their head.

When it comes to passing into the post timing will be very important. This type of pass should be made as the post player comes into their post position. The most effective and easiest pass to catch is the bounce pass. When the balls on the wing, the ball should be passed to the low post quickly before the defense is ready.

By making a good fake the passer should be able to clear the passing lane. They should also learn how to execute the step around bounce pass.

Passes should be kept simple. There are many players that will throw a pass one-handed that are not often caught because the ball has a sideways spin or the passes errant, making it difficult to catch. Bounce passes are good to use when you’re making tough passes into the low post, or when attacking on fastbreaks. While fun, a behind-the-back pass is often overkill. In most cases, the best pass to use is the two-handed pass. Learning and mastering even the simplest passes will be heavily based on team effort. While you can practice passes with family and friends, it’s crucial that you form a bond with your teammates and learn their passing style, identify the signals they send when they intend to pass, and show them that you’re a true team player.

Passing takes practice and teamwork. You’ll need to work with other players on the team to learn about their passing style, the signals they send when they intend to pass, and which passes they utilize the most.

Learn the basic ways to pass the ball before you dive into learning advanced ways to pass. While advanced passing styles are more flashy and fun, keep your passes simple for the best results.

As you probably already know poor passing can destroy a team’s offense, which can result in breakaways for the opponent and possessions with no shots.

After studying these basketball passing fundamentals, you can focus on perfecting your passing techniques and working with your teammates in order to learn moves, signals, and form a bond that will allow you to remain in sync on the court. But learning how to pass isn’t easy. It will take practice and dedication, and your teammates must be on board. Passing practices and drills can be an excellent way for new players to learn how to play hard together and form a bond that allows you to connect to a receiver on the court, in the heat of a game.