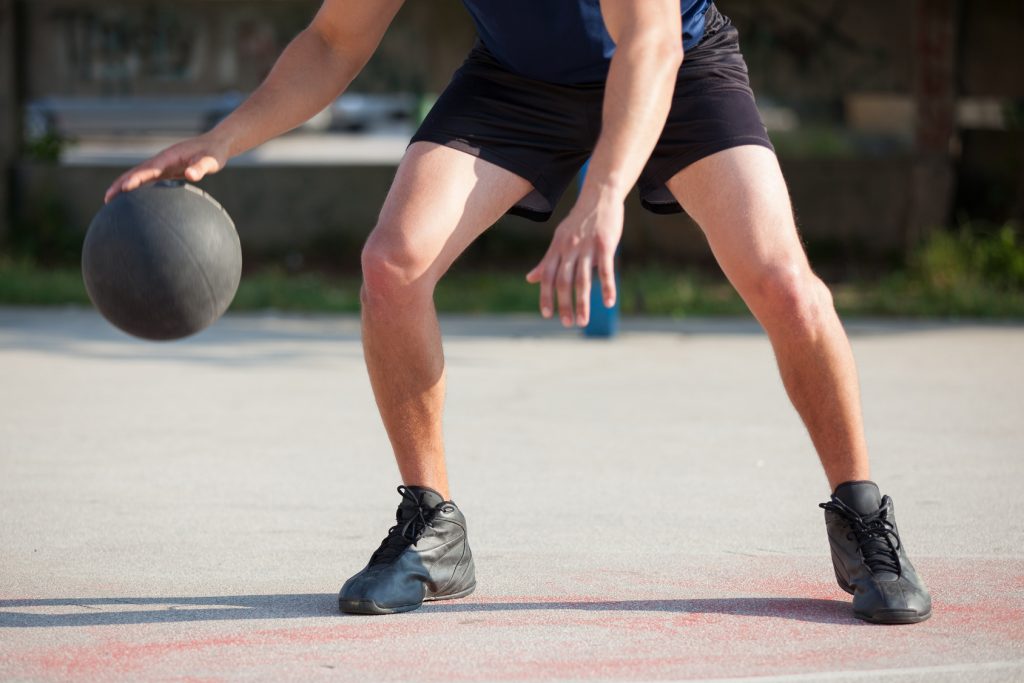 The term basketball crossover moves refer to switching and dribbling the ball quickly, going from the dominant hand to the other. This is done in order to confuse the defender. When you have this technique mastered it can be one of the most effective techniques you’ll use. The right type of crossover will allow you to change direction easily, using speed. The whole goal behind this move is to distance yourself from your opponent by faking the direction and getting past the defender in order to get a chance at a shot.

When you fake out a defender it’s crucial that they believe you’re headed in the opposite direction. This can be achieved easily by leaning your body in one direction as you dribble and then switching the hand you’re using to dribble, suddenly, and getting past the defending player. But for those new to basketball, this move is even harder than it looks and it’s definitely a move that you’ll want to practice for several weeks before you put it to the test in a real game.

Basketball crossover moves are complex and can require several months of practice, depending on your skill level and how you handle the ball. There are many variations of this move, but essentially, the goal here is to fake out a defending player, making them think you’re headed in one direction as you quickly dribble the ball into your other hand and head in the opposite direction that the defending player thinks you’re going.

As an example, let’s say you’re leaning your body and head to the right, instead of going right like the defending player thinks you will, you’ll actually dribble the ball into your opposite hand and quickly head to the left. If done correctly, this will leave the defending player confused, slow, and off balance while you head down the court and take your shot. But don’t be deceived, if you’ve ever seen this play in action then you know it can be complicated to fake out a player, especially one with more experience than you. Ultimately, you’ll need to have mastered power dribbling and have excellent ball control before you even try.

A crossover is not the type of move you should be practicing if you’re new to the game. In the beginning, there are so many things to learn including basketball rules, ball handling, and shooting techniques, that crossovers should be at the bottom of your list. Before you even consider learning this move, you need to have total control over the ball and how you move down the court. If you’re struggling to get from one end of the court to the other without the ball getting stolen, or your dribbling is best described as sloppy, then crossovers are not for you. But if you’ve been playing the game for several months and feel like you’re up to it, go ahead and give it a shot. Keep in mind that this move isn’t one you’re going to master overnight. In fact, it takes players months to learn how to smoothly execute it, and that’s with several hours dedicated to practicing and perfecting this challenging technique. 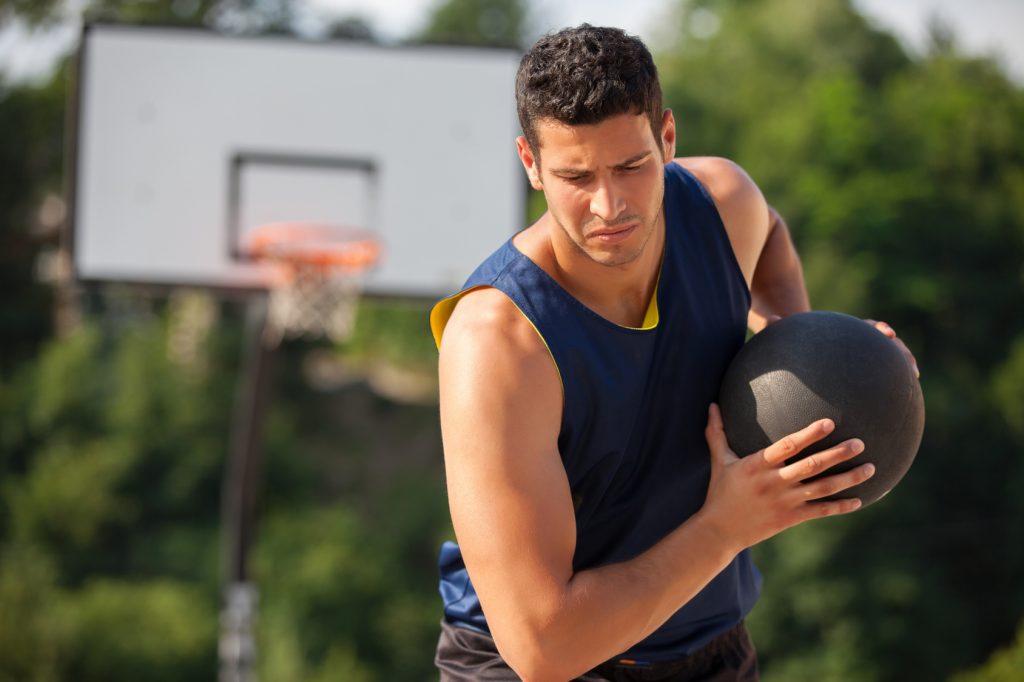 When it comes to the crossover, there are several variations to choose from. However, the basic technique will usually remain the same. When performed quickly and smoothly and with major consequences, it’s referred to as the killer crossover. But in order for it to be considered a killer move it has to have the perfect execution, one that will leave your opponent unbalanced and stunned and it should leave them with no time or opportunity to move. The other player will either fall, slip, or remain standing there as you fly by them with the ball.

Getting Down to Business

Using a crossover, you have to be extremely fast. This move is often performed by more experienced players that have excellent dribbling skills and ball control. In order to perform this move, the player will fake his moves by taking a wider step in a single direction, in addition to faking their head movement in that same direction. The player will then quickly and smoothly dribble the ball to their opposite hand and move past the defender in a different direction. The player must then execute the move in the front from side to side or between their legs. Should the defending player fall for the fake out, they will be put off guard and the other player will have effectively created a clear path to move past their opponent.

To do a crossover, try the following:

Begin by dribbling the ball using your dominant hand. Dribble up to the defending player. Slow down or stop a couple of feet away from them and keep your left leg forward.

For the next step, you’ll need to pretend that you plan on taking a jump shot. You won’t actually need to take the shot here. Instead, you’ll raise your body slightly as though you’re going to take it. At the same time, you will need to maintain dribbling the ball. If the defender falls for this move he will also raise himself to block your jump shot. As he does so, he will be bending forward, which means he will have hindered his ability to move backward in order to defend his position.

If you take note that the other player is falling for the fake out, you’ll then dribble the ball from your dominant hand to your other hand. Then, dribble it between your legs or shift it from side to side.

Now you’re ready to fake your movement towards your left. To do so,  you’ll need to drop your right shoulder slightly and move to your left so that you give the impression that you’re about to dart to the left. Make sure you pay close attention to how the defending player is reacting during this time since their reaction is the key to ensuring this move is carried out effectively.

If you did a good job of faking the other player out they will go to the left in order to block your movement. This is the exact reaction you’ve been looking for. As soon as they move to the left, you’ll perform the crossover and shift the ball back to your dominant hand, ensuring that the ball stays close to your body. Next, you’ll push off using your left foot moving towards the right and passing the defending player. When you move in this angle you’re blocking the defender while also giving yourself the clear path you need to quickly move past them. Now you can dribble the ball ahead of you in order to prevent another player from attempting to steal it.

As you fly by the defending player, their momentum and attention will be focused on the opposite direction. If they react suddenly, realizing the fake, they will probably lose their balance.

Will Mid-Sole Shoes Give Me the Type of Flexibility I Need to Move Faster?

Most players will claim the best basketball shoes for ankle support are high tops, and in many cases this is true. However, when it comes to moving quickly, for crossovers, you may be better off with a pair of mid-soles like the Under Armour Men’s Jet Mid Basketball Shoe. These shoes are equipped with the type of grippy soles you need on a slick indoor court, plus the EVA foam interior will give you the cushioned interior support you need if you’re a player that gets a lot of court time.

What’s the Biggest Mistake a Newbie Makes with Crossovers?

Double dribbles. Learning how to control the ball and practice different types of dribbling techniques can be tricky for the beginner. Because of this, only experienced players use this type of crossover move. If you’re new to the sport and you’re not confident in your dribbling skills, stop by and read my article on how to get better at dribbling. You’ll find some great exercises and tips on what you can do to improve your ball control, what not to do, and how you can increase your agility out on the court.

As you can see, this is one move that takes quite a bit of work to get right. If your technique is sloppy, if you’re not confident in your ability to fake out a player, then this move will totally fall apart. This move is definitely not one you should try if you’re new to the sport and still struggling to master the basics.

Performing basketball crossover moves isn’t as easy at it looks. It fact, it can take several weeks or months to improve your ball handling speed and skills. But with plenty of practice and time, you should be able to hone your skills and learn how to sell your fake out to a defending player, moving fast enough to get around them and sink a basket. During practice, focus, work hard and execute this move over and over until you’ve got it down.