Home » The 5 Basketball Mobile Games You Should Try! 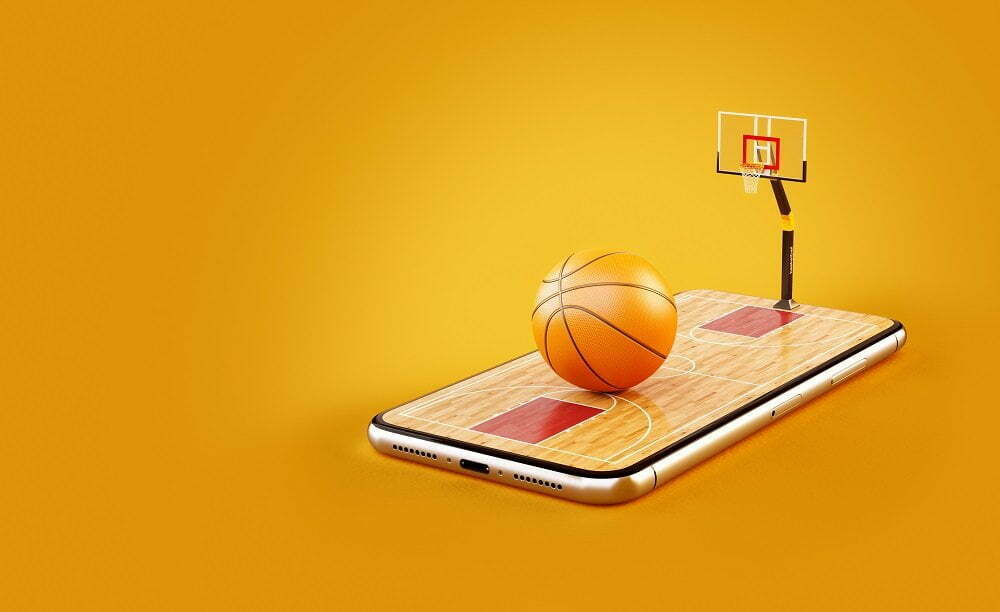 If you’re on the go, but you just can’t stop thinking about playing a game of hoops, there’s a solution. With your smartphone, you can now play a game of B-ball wherever you are. My guide covers the five basketball mobile games you should try that are made by some of the biggest names in the gaming industry. I’ve also included other games that are designed for players of different skill levels and those who are looking for a more challenging, unique basketball-related game that can really put their skills to the test.

Basketball on the Go

Basketball has remained one of the biggest sports in the world for decades. Whether or not you have a favorite team, you play on a team yourself, or you enjoy a regular pick up game with friends, there’s a basketball mobile game for you, and one that can keep you entertained, whether you want to brush up on learning how to dunk or improving your shooting accuracy, these games can be a great way to pass the time and play your favorite game on the go. In order to make it on the top five mobiles B-ball games, the games that I’ve included had to come with intuitive controls, a great gaming experience, variety, and a high user score. I’ve included other games in this guide that beginners and serious players alike will also enjoy, but the top five are very versatile and games that definitely earned their place on the top five list.

Below, you’ll find a list of the top b-ball games that earned high marks from gamers of all skill levels.

If you’re looking for a street style game, then Street Basketball Association is a great option. This game includes local and online multiplayer features and a variety of game modes including quick game mode. Additionally, it also offers a training mode, special events, league games, and more. The game’s mechanics are pretty simple. The game follows basic basketball rules, although you’ll play half-court style in most modes. It also offers a variety of difficulty modes, so you can turn up the game’s difficulty once the beginner setting becomes too easy for you. This will allow you to continue to challenge yourself and brush up on your shooting skills.

This is one of the most perfect games for players of all skill levels. It features the classic arcade-style that most gamers love, and it allows you to play two on two, without strict rules. Players are allowed to dunk, steal, and shove other players. This game also comes with hardware controller support, online and local multiplayer support, Android TV support, and campaign mode. This is one of the best online games for players new to the sport or those who want that nostalgic arcade-style game.

This game is the official NBA mobile game and it comes with intuitive controls. The game features some great graphics, not to mention every player and team in the NBA. The game also offers an online multiplayer experience, live events, a variety of playing modes, and more. Unfortunately, the game’s live updates usually come with bugs that can have a negative impact on your gaming experience.

While the game itself is simple, it’s also very addictive. If you’re a player or a super fan, then you’ll love this game and find yourself opening up this app whenever you have a minute to spare. It features great graphics and realistic physics. The two game modes allow you to enjoy a couple of different playing experiences, however, the goal of the game is the same and that’s to shoot a ball to earn some points.

Technically, this is a basic gacha game, however, it does have a basketball aesthetic and one that offers a good spin on the entire sports game genre. It allows you to experience a whole new level of B-ball by drafting players, unleashing your team in multiplayer battles, and creating a game strategy. Gamers will get to enjoy a different side of the game, one where they can create the ultimate dream team and set yourself and your team up for victory. You can also make heat of the moment plays in order to take the lead as the game’s tension builds. At pivotal moments of a game, it turns into a 3D gaming experience for some intense B-ball action. You can control the players on the court and determine whether you need to pass to a better player or take your chances and take the shot yourself. The game may not be like most traditional basketball videogames, but it’s pretty immersive and makes a perfect option if you’re on a long flight or you want a way to kill some time while you’re waiting for an appointment or an important meeting.

These games may not be as challenging to the skilled gamer, but the basketball player or fan will love the intuitive controls, decent graphics and a more relaxed gaming experience that’s sure to provide several hours of entertainment.

This game offers a fresh take on b-ball. The graphics are blocky and charming, offering a cute style that basically sucks you in and keeps you hooked for hours. The game offers multiplayer action so you can play against your friends or the computer.

If you’re looking for a game that offers more of a retro feel, then you’ll love Bouncy Basketball. It’s fun, immersive, and designed for gamers of all skill levels. The game features a classic 2D pixelated graphic design that offers the same type of feel that you may remember from classic arcade gameplay. It also offers a variety of options when it comes to game length. You can make dunks, practice your three-point shots, and go for a head to head battle with one of your friends.

This game is one of the most popular on the market, due to its intense sports accuracy videos. You’ll play by shooting a variety of things, around, over, and through obstacles, in order to make the perfect shot. This beginner-friendly game is fun, especially if you need a game that can make the time fly by. Some of the features include unlockable characters, challenges, and one on one gameplay. It can’t compete with the basketball video games of today, but it does an excellent job of keeping players engaged and wanting more.

The games in this section include fantasy-style basketball games that allow you to trade players, pick players from the draft, smooth talk free agents, create game strategies, and more.

This is one of the biggest fantasy basketball platforms on the internet. Gamers can join random leagues with friends or strangers, and do fun fantasy sports stuff such as checking out free agents or trading players. The game also allows gamers to edit their lineup by dropping or adding players. Additionally, players can also communicate with other managers in the league. While the game does have a few bugs, it’s still worth the buy.

When it comes to the fantasy sports space, Yahoo happens to be ESPN’s biggest competition. Their latest app supports a variety of major sports. Gamers can participate in drafts, pick up free agents, change their lineups, set their roster, and more. The app also features an integrated chart so you can communicate with other managers or talk some trash. While the graphics are pretty decent, they’re not really anything to brag about. For fantasy basketball, this app and the app by ESPN take the cake.

This game allows gamers to manage their own NBA team, including taking care of players, training, drafting, and creating game strategies. Basically, the game allows you to do everything a manager would typically do. If you love this sort of gaming option and drool at the thought of landing the number one draft pick, then you’ll love this gaming experience and all the features it has to offer.

The basketball games in this section are perfect for the gamer who loves showing off their gaming skills by crushing their friends in a friendly game of b-ball. Each of these games also earned top marks for their intuitive controls and smooth gameplay action.

There’s a 3D version of this game available however, this version offers some features that the 3D game doesn’t. It offers a variety of locales that allow you to show off your virtual skills, in addition to a multiplayer feature that allows players to go up against their friends via a 3V3 format. If you want to have some serious fun playing against your friends, then this is the game for you.

If you want a multiplayer b-ball experience, and you don’t care how good or how bad the graphics are, then you’ll love Stickman. This game allows players to experience pure fun with this fast-paced gameplay, impressively smooth animation, fun atmosphere, basic controls, tons of replay options, and fast-paced action. Players can select their favorite team, ranking up while they play a variety of seasons, win cups and play in spectacular areas. They can also choose the street b-ball mode, which offers a whole different way to play. The gamer can determine whether they want to have total control over their players using the manual shoot timing and running, or they can choose to use the automatic running mode which gives them control over the precise passing time as they watch their players perform impressive dunks.

This is one of the most popular b-ball games because it offers a classic arcade-style that many players and gamers love. The PVP game features a one on one setup. The goal of the game is to outscore your opponent before the clock runs out. Additionally, the controls are very intuitive. While the graphics aren’t exactly impressive, the game offers a fun premise and an excellent pace. It’s also a multiplayer game, so you can play against a friend and enjoy a split-screen multiplayer experience. However, if you do decide to go this route, I recommend using a tablet, since playing on a split screen using your phone can make it difficult to clearly see the details of the game.

If you love basketball and anime and you want a way to enjoy your favorite sport on the road, then you’ll love Freestyle. The game features an anime art style, complete with 3V3 gameplay, so it’s a game that you can play with your friends when you’re traveling or lounging around the house.

The 5 basketball mobile games at the top of my guide earned top marks from gamers of all skill levels, and are perfect for the serious or casual player, or the basketball fan. The other games didn’t make the cut, but they do have something more to offer the basketball fan, whether you love fantasy basketball, need a game that’s beginner-friendly for you or the kids, or you and your friends want to play a multiplayer game that’s challenging, fun, and gives you the opportunity to totally smash the competition.